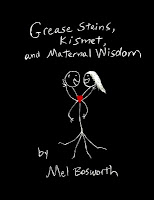 Mel Bosworth is a fine writer and a fine person, a deadly grand combination. Don't take my word for it, read him and have a look at this interview and you'll see I'm right on both counts.

To start this, I asked Mel if he would offer a "MicroMel," a bit of writing from him. This is what he placed before us:

"My cow is sad sometimes. When my cow is sad I play her a song with my fish whistle. My fish whistle is made of porcelain. It is hand painted pink and green. Winnie-the-Pooh holds a butterfly and a purple rubber band. Fish and Pooh are busy. Cow needs attention."

SLC: Let's just start by talking some about your newest work, Grease Stains, Kismet, and Maternal Wisdom, coming out later this year from Aqueous Books. How did this book happen? Take us into the delivery room. Show us where it first opened its eyes.

MB: Grease Stains. Kismet. Maternal Wisdom. The birth. Well, this piece of work has been with me for a while. I wrote it 7 years ago, I think. At the time, I was very busy chasing women all over the country. And all that chasing sparked a mean writing streak last lasted three weeks. And after those three weeks were over I think I had upward of 40K words. And it was raw and crazy. Like I was. And it had heart. Essentially, it's a romance. But I sat on it. I never really thought about pushing it out into the submission ring. I didn't know how at the time. 7 years ago writing was...different for me. Or maybe the same, but 7 years younger. I wasn't corrupted as badly with the whole "thinking" thing. I just let the fingers fly. It's something I have to constantly remind myself of now, and it's something I try to put into "practice" without really "practicing," if that paradox makes sense. So anyway. Over the years I kept coming back to Grease Stains--chopping, pruning, changing--and I eventually whittled it down to about 20K words, mindful to maintain that "raw, crazy heart" that made it so fun to write the first time. And then I blasted it out in 2009. And the literary journal Prick of the Spindle jumped on it. It was the longest piece of work they'd ever published. And I did my share of backflips, for sure. Prick of the Spindle's Editor in Chief Cynthia Reeser is a true champion of indie and underground writers, which I was at the time, and which I still am, very much, and happily so. So when Cynthia announced the imprint Aqueous Books, and that Grease Stains was going to be the second title released behind Mike Atwood's "The History of Santa Monica," I was...damn. I was...yeah. Thrilled. Absolutely thrilled. I was thrilled the first time she wanted to publish it online, and I was even more thrilled when I learned it would soon be available in 3-dimensions. Hold it in your hands. Take it to the beach. Let it entertain you. Cynthia even let me draw my own cover. How cool is that???

SLC: I nearly mentioned the drawing on the cover before and didn't. I wanted to say it was fine – the small, red heart in the middle and all other lines flowing out from there. Such an awesome thing, Cynthia giving you that chance and a very cool piece of art. Moving away for a bit, something I've thought for awhile and want to to hear from you on is your laid back attitude about yourself. More than most, you seem to have a light-hearted view of yourself while still producing work of weight and importance. Have you always had this relaxed position, or did it develop over time? Do you find it helpful?

MB: That's a good question, Sheldon. And I guess the best answer is that I've always been kind of laid back. Not sure why. Maybe I learned it from hanging out with laid back people, people like you, Sheldon. You come across as kind of a laid back guy yourself. It's good, right? Granted, the daily stresses of life are always there, always lurking, always around, but I try to keep them at bay with a laugh. Sometimes it works, sometimes not. Sometimes I get all bugged out about shit, but I try to remind myself to breathe. It's as simple as that: breathing. Once I held my breath for a year. And I knew I was doing it. And it wasn't good. Carrying stress like that will kill you quick. So maybe I'm laid back because I'm afraid to die. I don't know. So I suppose I do find it helpful, in writing, in life, because it's much easier to focus on a single thing when you're not allowing yourself to be crushed by everything else. But I crumple sometimes. I'm laid back, but I'm still susceptible to the mayhem.

SLC: The West Virginia writer Breece Pancake was once asked if he "wrote his stories for certain markets." His response was to say, "I don't write to make a living." Of course we'd all like to make a living doing only this good work, but where do you stand on the issue of writing for publication (that is with publication in mind) as opposed to writing simply for the sake of the story and then moving on from there?

MB: Great question, Shel. And hm. I suppose I write stories for the sake of the story for the most part. It's fun to create. And at this point in the game (for me, and for a lot of us, really) it's not about making money, or being able to make a living with our writing. That's simply not realistic. Not when over 90% of the markets (I'm just throwing that number out there but I'm confident it's close) don't offer much in terms of monetary compensation. And even now, for me, with one small collection available in print and a novella on the way, I'm not expecting to make anything. And even the bit of money that I do make from my writing goes right back into the machine. It's not buying me the necessities of life. It's buying books, or paper, or ink. For indie writers and publishers, money is laughable. We're all taking a hit. We're dumping gallons of time and energy (and often our own money) into a process that rewards us by allowing us to be a part of it. We're running a race for the thrill of the run, because it makes us feel good. We're junkies, Shel, the lot of us. The rush of creation. The rush of knowing that something decent, perhaps even readable, can gush from our fingertips. I don't always write stories with a particular market in mind (although I have on occasion) but I am very cognizant of wanting to write something worthwhile, or what I deem worthwhile. And luckily, a lot of my favorite pieces to write have found good homes.

SLC: We are certainly junkies for this whole wonderful process. No doubt. Writing, reading, sharing with others those important parts of ourselves. You've been more than generous in doing your part in the sharing of the good work, such as your YouTube channel Mel Bosworth Reads Things. When did the idea to do this come to you? How has that process been for you as a writer, a reader, a performer?

MB: Ahhh, the YOUTUBE! The YouTube is fun. My little reading channel began one lonely night last autumn. I realized I could take video with my digital camera and away I went. I thought it would be cool to solicit work from other writers and then film myself reading it. I didn't want to just film me reading my own work. There's only so much tooting-your-own-horn you can do. And people got a kick out of the reading series. The writers enjoyed it, I enjoyed it--it was enjoyment. Big Other invited the channel over to their place for a while, I went on a little hiatus, and now the channel is doing a bit of freelancing. During the month of May a video will be posted at Dark Sky Magazine every Monday. I'm actually in the process of gathering up some material as I write this. AND I finally learned how to convert MOV files to AVI so I can do titles and credits and the like with Windows Movie Maker. It's a hoot, Sheldon! A HOOT! And the process has been good for me as writer because I don't just read other peoples' work with my eyes, but I chew on their words too. Reading aloud is very important. Not just your own stuff, but other stuff too. Stuff stuff stuff. Stuff the bird! What? But yes, the overall experience of the YouTube has been very good. Gives me an opportunity to knock on doors and "meet" other writers that I admire. Maybe in a year or so I'll put together a DVD. We'll see what happens.

SLC: What's it all about?

MB: It's all about understanding what broth is. We're all chicken chunks in a big vat of broth. The broth is the dark matter. It's all around us, it runs through us. We don't see it because we're in it, and it's in us, but the broth is the true shape of things. So the next time someone asks, "Where's the broth in this badboy?" you tell that dude, "The broth is right here," and point to your heart.

Read some of Mel's work:

Learn to Lean at Wigleaf

I'm so truly thankful to Erik Smetana, founding editor and publisher of Stymie, for publishing my piece "Free Baseball" yest... 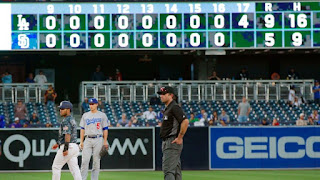